Juandalynn Abernathy: A child of the Civil Rights Movement Living in Germany 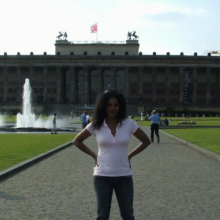 Juandalynn R. Abernathy was born to Mrs. Juanita Jones and Reverend Doctor Ralph David Abernathy at the beginning of the non-violent American Civil Rights Movement that her parents co-founded with their best friend, Dr. Martin Luther King, Jr. that changed the course of American history and politics in the world.

During her early childhood Juandalynn survived the frightening experience of the bombing of her parent’s home. She participated in all of the major Civil Rights Marches and led the mass integration of the school system in the South in 1965. During her childhood, she witnessed many of the crucial and important decisions that influenced American laws and society - the Civil Rights Bill, the Voting Rights Act and the Public Accommodations Act, Fair Housing Bill and the National Food Stamp Program.

Ms. Abernathy is a classical concert singer whose talent was discovered and encouraged during her early youth. She was first nurtured by her parents' dear friend and regular house guest, the famous gospel singer Mahalia Jackson, who prophesied that the baby Juandalynn would have a career as a classical singer. Young Juandalynn began singing publicly and regularly in her father's churches as a child. She was known as "the little girl with the big adult voice."

Ms. Abernathy was awarded scholarships at Oberlin College Conservatory of Music for her Bachelor of Music degree, and Boston Conservatory of Music where she earned a Master of Music. Her powerful soprano voice enabled her to study in the International Master Class in Luxembourg with Prof. Ileana Contrubas. Ms. Abernathy was a finalist for the Metropolitan Opera Auditions in New England. She was also awarded a scholarship to study at Goethe Institute in Munich, Germany. Her further studies led her to the Universita di Perugia, Italy. Many additional awards underline the striking quality of her soprano voice.

Indeed, Juandalynn R. Abernathy became a well-known opera, concert and spiritual singer. Ms. Abernathy was commissioned to give the opening concert of the new Opera House in Malta. She has given International Concerts in many major cities in the United States, in Tokyo, Japan where she recorded the CD "A Home in Glory", in South America, Bulgaria, Czech Republic, Austria, Serbia, Montenegro and Switzerland, just to name a few. In 1996, she performed at the opening concert for the German delegation at the Olympic Games in Atlanta, Georgia.

For the Martin Luther King Day Celebration, she gave a classical concert with the Santa Monica Symphony Orchestra. She has performed at the Opera in Graz, Austria, in Montgomery, Alabama for the 50th Anniversary of the beginning of the Civil Rights Movement, in Tübingen, Germany for the Jazz and Classic Days at the German-American Institute, at the Award presentation ceremony with former German President Johannes Rau for the Universal Children’s Day at Schloss Weitenburg, Germany, at the Summer Festival Burgas, at Varna Summer International Music Festival, at the Sofio Music Weeks, on the American Lifetime Television Series "Any Day Now" in Los Angeles, CA., at the Malta Cultural Experience, the Schleswig-Holstein Music Festival, Germany, Music Days at Mainau on Lake Konstanz and at the Culture Summer Rheinland-Pfalz, Germany.
Her TV and Radio appearances took place on CBS, NBC, Lifetime TV, National Radio Bulgaria, Radio Plovdiv, Salon des Artes, 1 Kanal Live, Sofia, Skat TV, Burgas, Radio Sofia, Radio Tübingen and TV Varna, Eurorom TV, Plovdiv and RTF TV, Germany.

Ms. Abernathy has studied and performed the opera roles of Mme Lidoine in "Dialogues des Carmélites", Donna Anna and Donna Elvira in "Don Giovanni", Contessa in „Le Nozze di Figaro“, Pamina in "Zauberflöte", Fiordiligi in "Cosi Fan Tutte", Mimi and Musetta in "La Boheme", Gretel in "Hänsel and Gretel", Dido in "Dido and Aneas", Bianca in "The Rape of Lucretia", Laetitia in "The Old Maid and the Thief", Nedda in "Pagliacci", and Micaela in "Carmen".